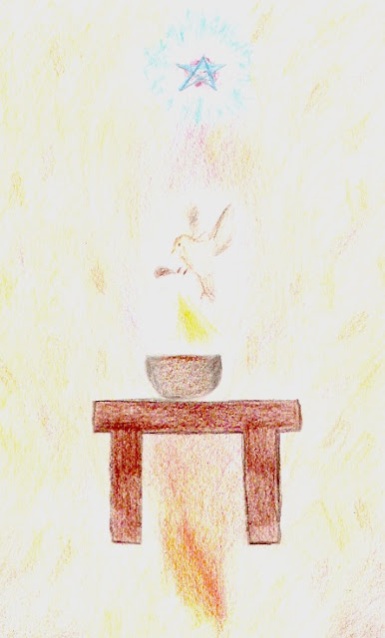 I have much lamented the destruction of wholesome food culture and unfairly excoriated the Brethren for their incapacity to function in the sorcery that involves the body on this account. It is only in the later years that we can command much power, and by then, we are so decrepit that we cannot.

So today I am presenting a recipe for a modern update of the wheaten and rye bread that was standard in Europe. This is cornbread, a staple of my Texas youth, and when soured for a day with regular San Francisco type sourdough starter, is quite delicious.  THE BEST SOURDOUGH FROM AMAZON

When we become psychic, as the work proceeds, it becomes impossible to think outside of the group mind that we are of. Most groups IN MAN MAGICK do not have the requisite level of food preparation necessary to maintain optimum health, and the dominant paradigm is of agribusiness, industrial food, and a great big pile of chemicals and surgery when the body breaks down, as it does under the normal regimen. Here is where the war boys come in with COWS – those meals ready to eat are killing us in civilian life.

One of the biggest culprits is the lack of pre-digestion by fermentation. It was not always possible to keep fermented foods viable in large amounts for nationwide distribution, so the health qualities were sacrificed in favor of convenience.

We should be grateful to have a readily available supply of really fine food. It was modern agriculture and these preservation methods that made a reasonable expectation of nutrition possible. At the same time, let’s move back to move forward into better health.

To get past the blockages in the group mind, it is a good idea to employ spell craft. Chanting binds the dead but also the living in more congenial ways than Hermetic dart arts or the war zone of Santeria. Light a candle and be a witch.

The bug is fed, the corn is ground
Bowl and powder soon be found.

A cup of each, a spoon of salt
Half of water not to fault

Heat the oven to a T
In half an hour the bread will be.

This is more Texas than Denmark, but we caucus broadly.

Sourdough starters need to be fed daily, and they are really yucky and scary. It is good that modern food production got rid of all of the germs that caused illness when there was no running water or adequate plumbing, and when the lack of cleanliness made our intestines a muck of ailment. Now it is time to go back a bit.

Here is the general recipe that I use for bread, and it always works, though I have substituted 1.5 cups of rye in for the wheat, and it germans up the bread nicely. There is nothing like the slight tang of the rye, and it’s probably better to mix up the grain.

My own corn muffin recipe is pretty much in that spell above, but it doesn’t need a spell.

This is an approximation. If you need to add a bit of flour to make it a reasonable texture, please feel free. Nothing is completely regular in home cooking.

I let this sit for anywhere from 12-24 hours. Any less, and it is chalky; more and it is insanely sour. I find my taste does best with 18 hours of fermentation for bread.

Butter the pan, then shake over the buttered pan a bit of flour to keep it from sticking. Preheat the oven to 350 degrees. Bake for about 33 minutes. 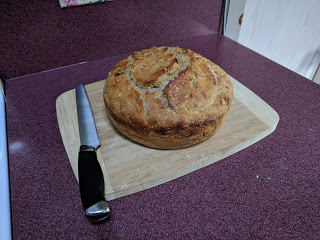 This is what the full sourdough rye bread looks like when it is finished. It is more crumbly than the industrial variety and goes bad fast, so it is a good idea to know your limits. Freeze half if you must, but only if rye is involved. Wheat alone falls apart.