A Path as a Complementary Opposite between Two Nodes 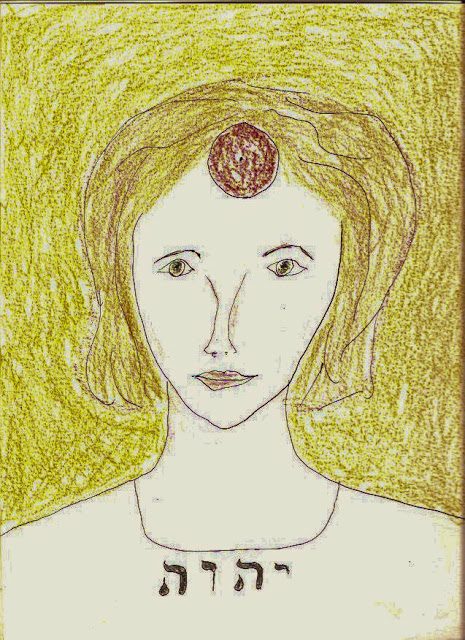 I have been working to introduce Odin to the entire Tree of Life via magical eucharist. I had at first wanted to perform nine eucharists per path, for all of the 32 paths, but only got to the first three and about two years ago hit an impenetrable wall.

Many in my family and friends have worked in the underworld on this project called THE BLACK MASS OF THE CHRISTIAN CABALA, in both ritual and meditation, throughout the entire Tree in the egregore of GENGHIS KHAN.

It was an undertaking of ten years and still forms part of the energy skeleton of many of those who were and are part of my soul.

I have been preparing to get going again, on the next path, when the inspiration came that to change it all into a Germanic situation is not welcome because it is a gentle Hermetic world of the Pacific Northwest and should remain essentially that. A little bit of Odin is okay, but not helter skelter, thank you.

So here we are with the face of The Sun asking, What does this image mean?

In Hermetics, this Path runs between Hod and Yesod.

The Tree of Life causes a person to be splatted into energy states that are not entirely focused or functioning in normal human life. Hod is the node wherein a spread-out being can focus their human mental activities on life. It is also a modern construct. Modernity requires that we view the world as the mental tools of modernity view it: science, religion, art, and politics.

And this is a great blessing, because we can function in the richest, safest, and most fulfilling culture imaginable, the modern world.

But it is a hindrance when we are trying to work in magick that is of a different calibre to what is possible in modernity. Evidently the new sorcery has solved this problem by using drugs to gain access to different mental and energy states, but the Hermetic Cabala talks about it in a tarot card that has been in continuous use for hundreds of years.

IT IS A HALLUCINATION WHEN YOU DO IT. Schizophrenia!

You as well but more socially acceptably. THIS IS JUST DRUGS – IT IS NOT REAL.

Yesod is the node with access to the spiritual power of nature in reproduction and family life. Because females do more of the actual action in causing reproduction, this node is more closely associated with women and more readily controlled by them.

Every biological life form exists to transmit its DNA. We are born, we grow and mature, we spawn, we die. This is seen so poignantly in other life forms that dwell in the flesh for a single season and die as they cast forth their seed.

There is a great deal of spiritual force that comes to the aid of the bearing and care of the young. It is a spiritual form of MONEY.

That is the basis of the sexual magick. The wizard arranges some spirits, has an orgasm that the spirits get to enjoy and use as a conduit to everyone related to the partners by sex — ancestors, family, lovers — and then they get the wizard a new jacket or participation in a vision world that you can scarcely imagine they cannot reach otherwise. There is more power in our own reproductive capacity than is expressed in actual procreation and that additional force can be used to power magickal activities. Up to a certain limit.

If there is a tight-knit group of power-working money COWS related to one of the partners, they can use the portal to call in money for themselves. Those who readily come to mind relative to my own magick include the Mormons, the Jews, the Amish, the Masons, and the gays. It is important to comprehend that when you have made the soul in a particular world, it is a requirement to be of it. That is THE HOLY GUARDIAN ANGEL who keeps your money safe.

As we have seen from my life, it was the cessation of sexual expression that enabled me to move up very far in the arts and in sorcery, and when it was clear that this extremity was not sustainable, I went overboard in the opposite direction of establishing a long-awaited household as a normal human and was, realistically, taken so badly to the cleaners by sex magicians that I had to do a dangerous old fairy magick that had been practiced by my ancestors and by Hermetics just to keep my life force from being turned into their new jackets etc. It was no doubt clear to many magicians around me that my extreme health problems and loss of professional attainment were a result of new world sorcery and they should have stopped and behaved in a measured and responsible way and didn’t.

Nobody knows what the Tree of Life is.

Between Hod and Yesod is the path represented by The Sun. In the Marseille deck, the sun is sending off little droplets that by the Rider Waite deck turned into Yods. There is a wall and in front of the wall are two children. Early on, they are in loin cloths but by Rider-Waite they are nude and are one male and one female. There is the addition of sunflowers that are, in my opinion, superfluous albeit decorative in a Victorian kind of way. There is also a fairy circle in Rider Waite that spells out what was formerly known.

What is the sun?

It is the source of both light and heat to our planet, the food of all plant life, the cause of our capacity to see things and ambulate reasonably, and a source of warmth.

The plants and animals that we rely on for food grow and die periodically in accordance with the patterns of the sun’s seasons.

One of the greatest intellectual feats of humanity was the construction of an adequate solar calendar so that we can know when to plant crops and when to expect the various matings of animals that are our food. Naked eye astronomers worked so hard on this that in the end it was celebrated into nearly every religion associated with the ancient Near East.

The sun has times, and so do we. Thus the sun comes to represent our own limitation by death and not just the deaths of the crops.

There is a wall here. We can see what is in front of it but not what is behind. Human life seldom has so much extent that it can deal with that much in the realm of possibility and the lower in social class you go, the less in some ways that is. Poor people die sooner. They have less access to education, travel, communication with different types of people and ideas. Thus they are helped quite a bit because of the sympathy of Nature with them — and also hurt because of its hierarchical energy. Fairy tales are full of both extremes.

The Path of the Sun in human terms can represent an aggregation of the human possibility flowing between the concrete “I” and the great magickal power of Nature. If you want to be active in both, you need a very large consciousness to do it, one that is universal enough not to be a blind force.

Hermetics does not seem to achieve as much in a single life in building the great exocortex of the western magick, but it does know a great deal about what happens when the power is reached.

The people in this picture are children and they are not far from their mother and from the nurturing of Nature.

In order for a concrete modern mind to get into the magick power, it has to become childlike the way humans were in former eras.

We read the stories of the Norse pagan gods and they seem like children’s fairy tales. God turns into a snake and then into an eagle and then steals a bunch of liquor. Sometimes God visits people and they eat his goats. Sometimes God wants a necklace and commits a lot of fornication to get it. Compared to the sophistication of the scholastic theologians, this stuff is ridiculous.

We can’t really put ourselves into these tales because we are grownups and those old heathens were children.

It was the childhood of humanity and if we want the magickal power that we have now recognized was genuine, we have to place our minds in that state. This can cause loss if taken too far, as we see from Don Quijote and a certain stupid WHIPPET.

This tarot card also contains a warning. Some dark work uses actual children in abusive and unnecessary ways and that is hinted at as we stare down the channel between the magickal mind of Mercury and the genitals of the Grand Man. BAD BADS AT BEDTIME can get the GET RICH QUICK sorcerers into magickal states that are otherwise accessible more slowly and by making oneself into a child. MORE COWS THAN YOU CAN AFFORD.

On the more obvious side of things, sexual magick can result in children in a normal way and they have to be supported and reared properly, or there will be serious repercussions.  As usual, the old power is as facetious as you can imagine. “Don’t worry if you have children—the sun will take care of them.”

That is the dark work of the wizards.

The dark work of witches is that they were often prostitutes who offered their own children for sale. This is much evidenced in the Abramelin and its use of the child psychic, and other grimoires mention this practice as well. The undertow of illegal activity with the young is part of all of this old magick, as noticed by that old school WHIPPET Dion Fortune, as well as the sorcery newly coming in.

The dark work of the witches is perhaps also seen by my own sacrifice of my potential children to an art career that my social class could not afford. This opened the channel to a magick that rooked me of it in the end. Chastity is as extreme as sex magick. IT IS A FORM OF SEX MAGICK. If I had stayed the course, I would be a very unkind regional theatre nun-playwright today.

The unpopular and magically expensive work of petitioning a Solomonic demon called BELETH to heal injured sexuality is thus how I balance the nodes of Hod and Yesod and give my Holy Guardian Angel an interesting entree for work in this era of overtaxing sex magick.

I do not mean to excoriate those who were victims themselves and often go to heroic lengths not to pay it forward. We see healing in The Sun here as well, in both this life and the world to come.

The Sun can also represent a very large and obvious thought. Public opinion has a magickal power, and the movement between the witches and Nature and the wizards and Art moves through the dimension of a Solar world. Public opinion on sexuality in particular varies, and the work of its benevolent expression is critical to all magick. This Solar Angel can strike with great fire if the nodes are out of balance.

Vietnamese art and literature, beyond borders